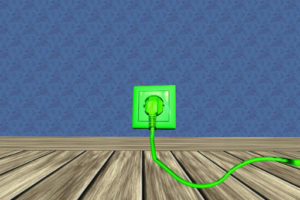 “Grounding,” as a term electricians use, simply means offering an electric current a return path to the Earth. The purpose of doing so is safety because when you ground an electric current, you prevent it from traveling over non-current-carrying metal objects, such as tools and the metal casings of appliances. These are surfaces we come into contact with regularly, so grounding helps prevent accidents involving possible cases of electrocution.

It sounds simple enough, but the subject of grounding is actually a broad and technical subject requiring technical knowledge and experience. Many people might think that wiring everything to a ground rod does the trick, but it isn’t that simple. Electricians have identified a number of common grounding mistakes to beware of:

Grounding electricity works on the principle that an electric current will always follow the path of least resistance. What many people don’t know is that different types of earth or soil have different levels of resistivity and impedance. Depending on the soil type, the level of moisture, and temperature levels, there may be ground impedance so that the earth may not be the path of least resistance for an electric current to take. As a result, an unwanted electric current will not go to ground, but will instead take other paths, such as metallic equipment, or even a human body.

The choice of ground wire also affects ground impedance. As a general rule, a thicker gauge wire is considered better compared to thinner wires because thicker wires exhibit lower resistance. But the actual size of the ground wire needed should be based on the short-circuit current ratings and the overcurrent protection devices in use. Code guidelines provide that the maximum impedance of the ground-fault circuit should be sufficiently low to facilitate the operation of the circuit-protective devices.

It is also an incorrect practice to leave excess coils of wire for ground wire. This may be an acceptable practice for wires inside panels, for instance, to help facilitate future repairs and maintenance. But ground wire should never be longer than it needs to be, nor should ground wire be subjected to unnecessary bends or curves. The reason, again, is because doing so creates high impedance which would negate the purpose of providing a ground wire in the first place.

Grounding is not the same as bonding, but they are often implemented together. Bonding involves providing connecting or bonding conductors between and among two separate metal parts. For instance, if you ground phone lines, gas piping systems, and a coaxial cable, you also need to bond them to one another. The reason is that bonding equalizes the voltage potential between them. If there should be an electrical fault, whereby one of the systems becomes energized, bonding two systems greatly reduces the risk of electric shock to anyone who may touch the two metal parts, preventing the stray voltage from using the person as a path for current flow between the two conductive systems.

Also, should there be an electric surge or a lightning storm, bonding minimizes the risk of arcing, or the jumping of a high current, from one system to another, preventing injury through electrocution as well as electrical fires.